Photovoltaics has recently attracted a lot of attention because of its high-tech nature, global market growth and easy to understand sun-to-electricity process. But beyond the widely accepted standard solar panel, there are many ways to capture and use solar energy today, all of which contribute to our well being while reducing harmful CO2 emissions. The partners in the Be-Smart project are working together to overcome existing market barriers and gain entry through imaginative and economical “transformative” elements. These new designs are reinventing the way photovoltaics are being used in buildings and look nothing like typical solar modules.

The power of the sun

The sun is an endless source of energy that delivers around 1000W/m2 of power to the surface of the Earth. The value of this power is instantaneous, and the energy obtained is by definition its power multiplied by time. Therefore, with around 1000 to 2000 hours of equivalent full sunlight per year, 1000 to 2000 kWh (depending of the location) of energy per m2 is received. This is as much as one barrel of oil (159 litres), which contains around 1700 kWh of energy. One square meter of ground receives close to the equivalent of one barrel of oil annually – that’s a lot! How much energy do we use annually? Driving 15,000 km by car requires roughly 900 litres of oil (for a car burning 6l/100 km) or 5 to 10 m2 of PV panels with an electric car ! A moderately well insulated house requires in the range of 100-150 kWh per m2 of floor for heating/cooling and electricity. If the energy of the sun could be captured with 100% efficiency, it is then easy to calculate that 10-15m2 of solar panelling would be sufficient to cover the full energy needs of a single household.

There are practically a multitude of possibilities to capture and use the energy of the sun, which would allow many houses to become energy producers and virtually independent from other external energy sources. A properly insulated house would, of course, be a pre-requisite.

Photovoltaic is often chosen for its simple use and installation. PV panels can be added to an existing roof (a.k.a Building Added Photovoltaic BAPV), or can be more elegantly integrated into a roof or a façade (a.k.a Building Integrating Photovoltaic BIPV). Adaptable to virtually any type of building, the numerous solutions that exist today also allow for the production of electricity with very low cost!

Numerous successful BIPV projects have already been accomplished mainly using crystalline silicon modules, coloured solar cells, homogenized black appearance, or within projects using thin film to create more pleasing results. Many research institutes and industries are working together to engineer and design new products and solutions to make a novel generation of PV products that will change the way people see and think about solar panel integration in buildings. In fact, some spectacular new examples have emerged over the last few years, including the possibility to create white modules or explicit colours like terra-cotta used in traditional roofs, and the integration of high-resolution images for more aesthetic applications. The possibilities appear endless with each building element, in theory, becoming a potential power-generating source.

For roof application, the most mature technology developed today is a terra-cotta module specifically designed for architecturally sensitive areas (Figure 1). In addition to its electrical production capabilities, the module also provides a high mechanical robustness in line with the building norms for construction materials. The elongated rectangular shape of the module features a large tile aspect, which can be integrated into roofs in sensitive urban areas typically seen in traditional European heritage.

BIPV façades are of particular value in high-density urban centres, where the ratio of façades-to-roof surface area increases with the height of the building. For façade application, several colouring techniques and different types of substrates were developed to transform the visual appearance of standard photovoltaic modules.

These examples demonstrate how solar panels can be architecturally integrated into buildings with elegance and respect for its historic heritage. 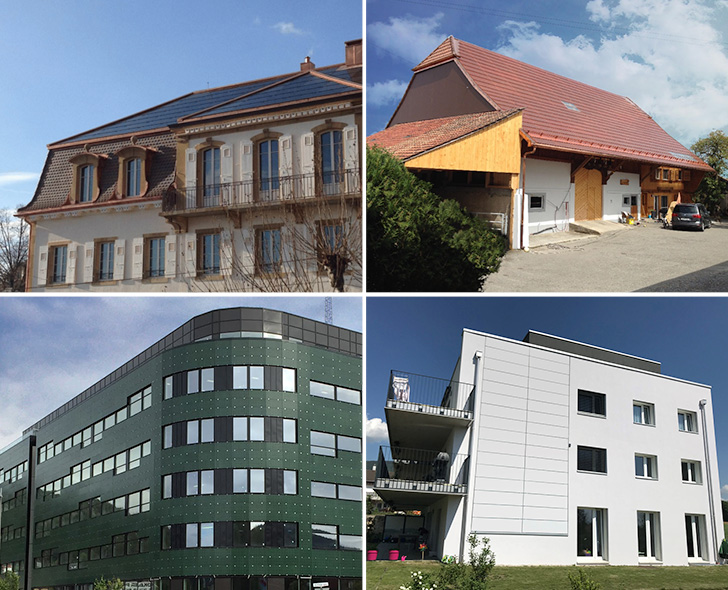 Naturally, PV can be used in many other places than roofs and façades: balconies, shading systems, garden tables, … even streets. It is all up to your imagination!

Challenges to a wide rollout

From an architectural point of view, building integration requires a flexible-modular concept of PV modules, available in a wide variety of sizes, shapes and appearances to satisfy both aesthetic and technical architectural constraints. Ideally, this means that the existing paradigm should be reversed: thought should be given towards preparing building elements containing an active photovoltaic component instead of trying to force the implementation of a standard power-generating photovoltaic panel as a building element.

Previously, many studies indicated ‘high cost’ as one of the greatest obstacles preventing mainstream BIPV implementation. However, this argument is no longer valid today. There is a paradigm shift taking place with photovoltaics: because of the many recent improvements in PV technology, solar cells and even high efficiency crystalline now cost next to nothing! This opens up huge opportunities, magnified by the addition of colour, as well as customisable shapes and sizes – BIPV is absolutely competitive with traditional building material, not to mention it produces its own energy. Clearly, market barriers are not only economic and technical, but also political, social and cultural as well.

Better awareness regarding the benefits offered by solar panels needs to be shared among all the stakeholders involved, starting with the architect’s earliest sketches. The BIPV value chain includes manufacturers, suppliers, building owners, tenants, property managers, financing bodies, governments, architects and installers. Each has their own set of priorities, technical constraints and competencies, necessitating new collaborative networks between stakeholders, and even possibly the creation of new professions to bridge any gaps. Moreover, it is of utmost importance to make these products known beyond the construction professional to any citizen willing and asking for a sustainable solution. 360 degree communication makes complete sense here.

Our challenge today is to cleanse the world of fossil fuels as an energy source through the ability to use PV as a true building material. The Be-Smart consortium, made up of all the players in the PV value chain, takes this challenge very seriously. We are confident that the key to convincing society of the necessities of using PV for roofs and façades is through active multidisciplinary collaboration.